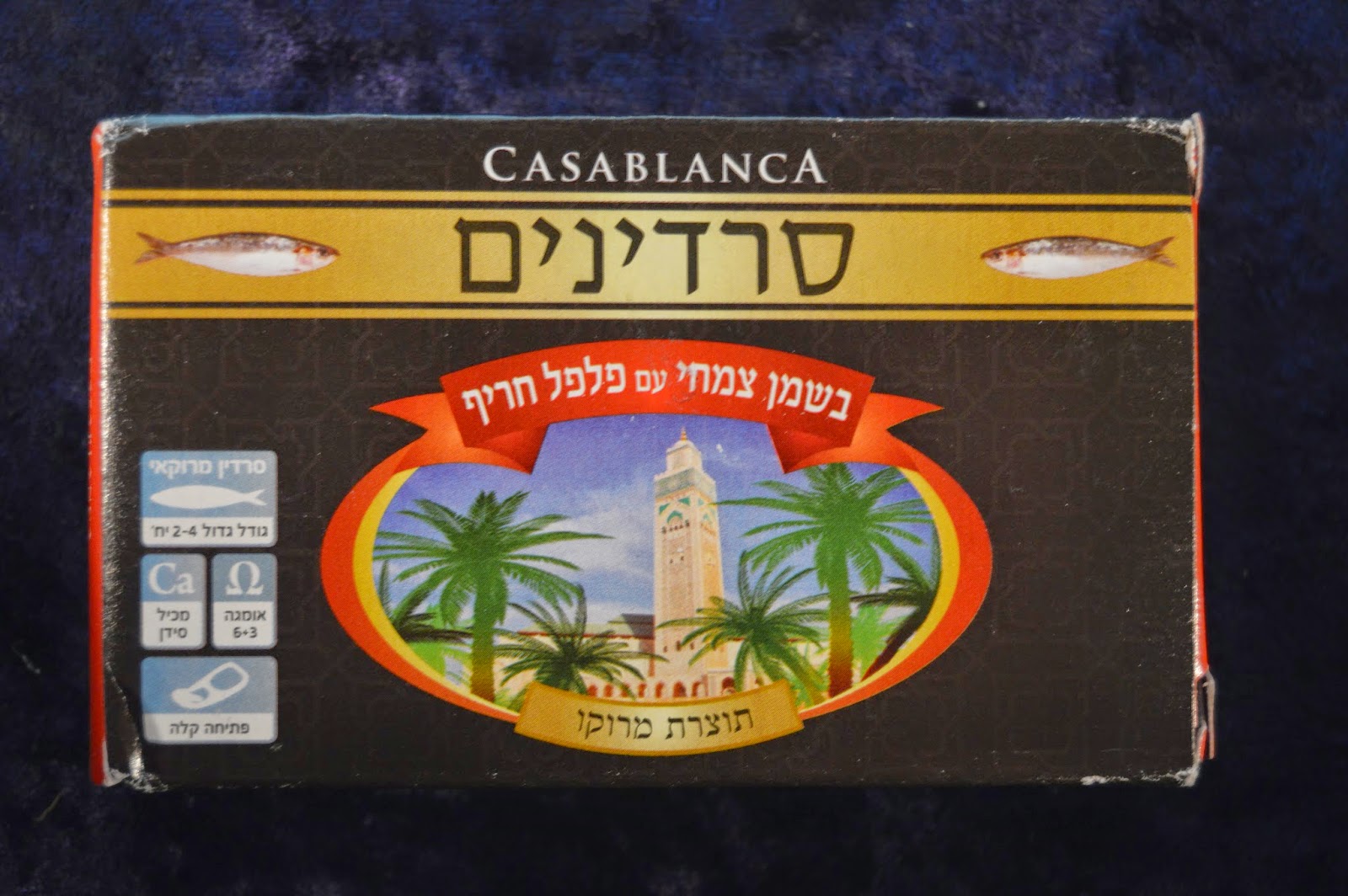 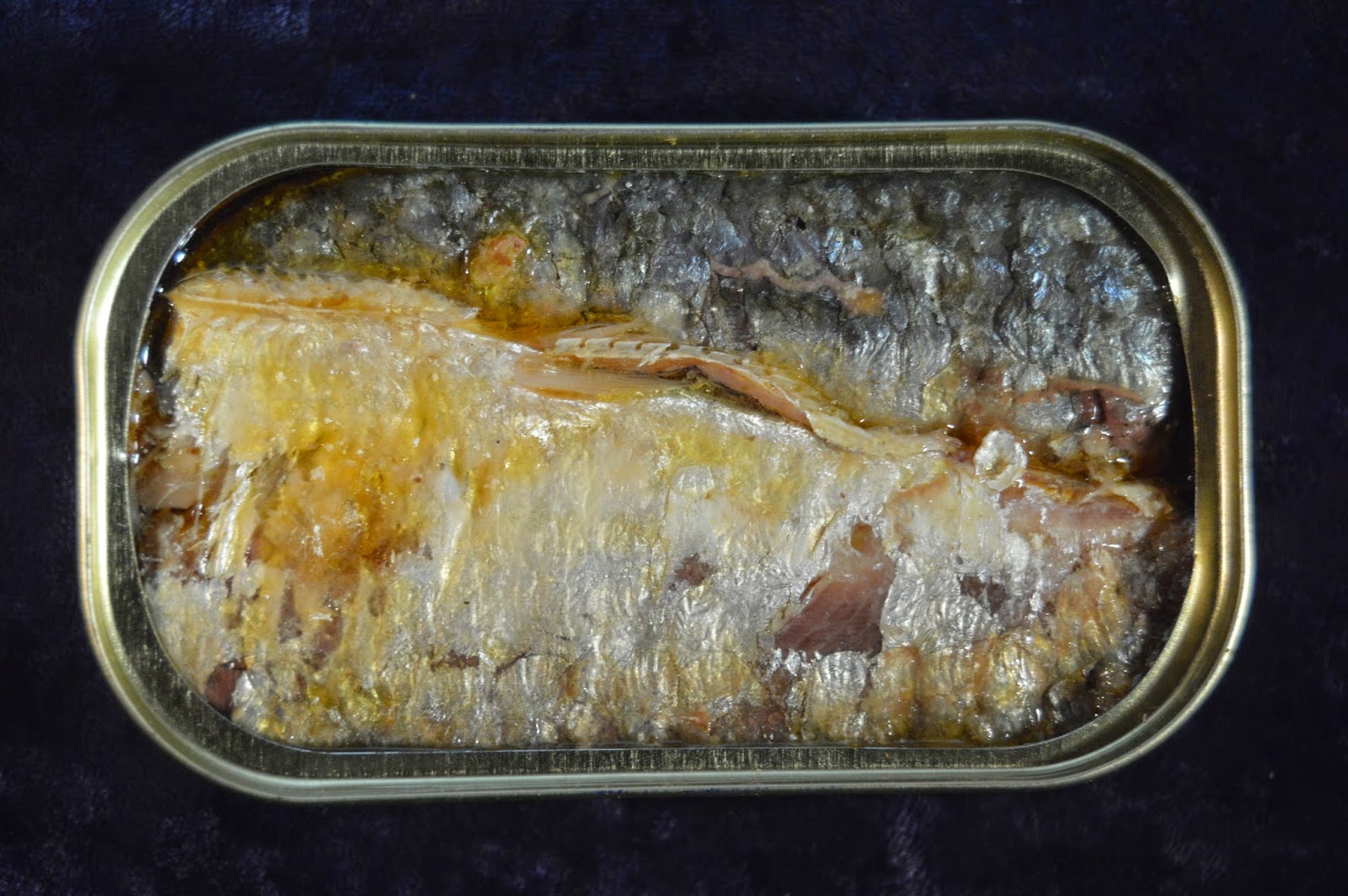 NUTRITION:
I am unable to read Hebrew

OVER ALL:
A very faint oil aroma upon opening. Two very large, scaled, tightly packed fish to the tin. A very nice heat hits you on first bite; the heat lingers through the tin. One large pepper to the tin. Scales are detectable; yet soft. A very clean tasting fish, no fishy taste or after. Not a spiny fish; a good textured fish. I would eat again. 5 Sardines.

Happy New Year Sardine Eaters! Did any of you Sardine Eaters do any Sardine traditions? Eat a late night tin or perhaps had a tin as hangover food? 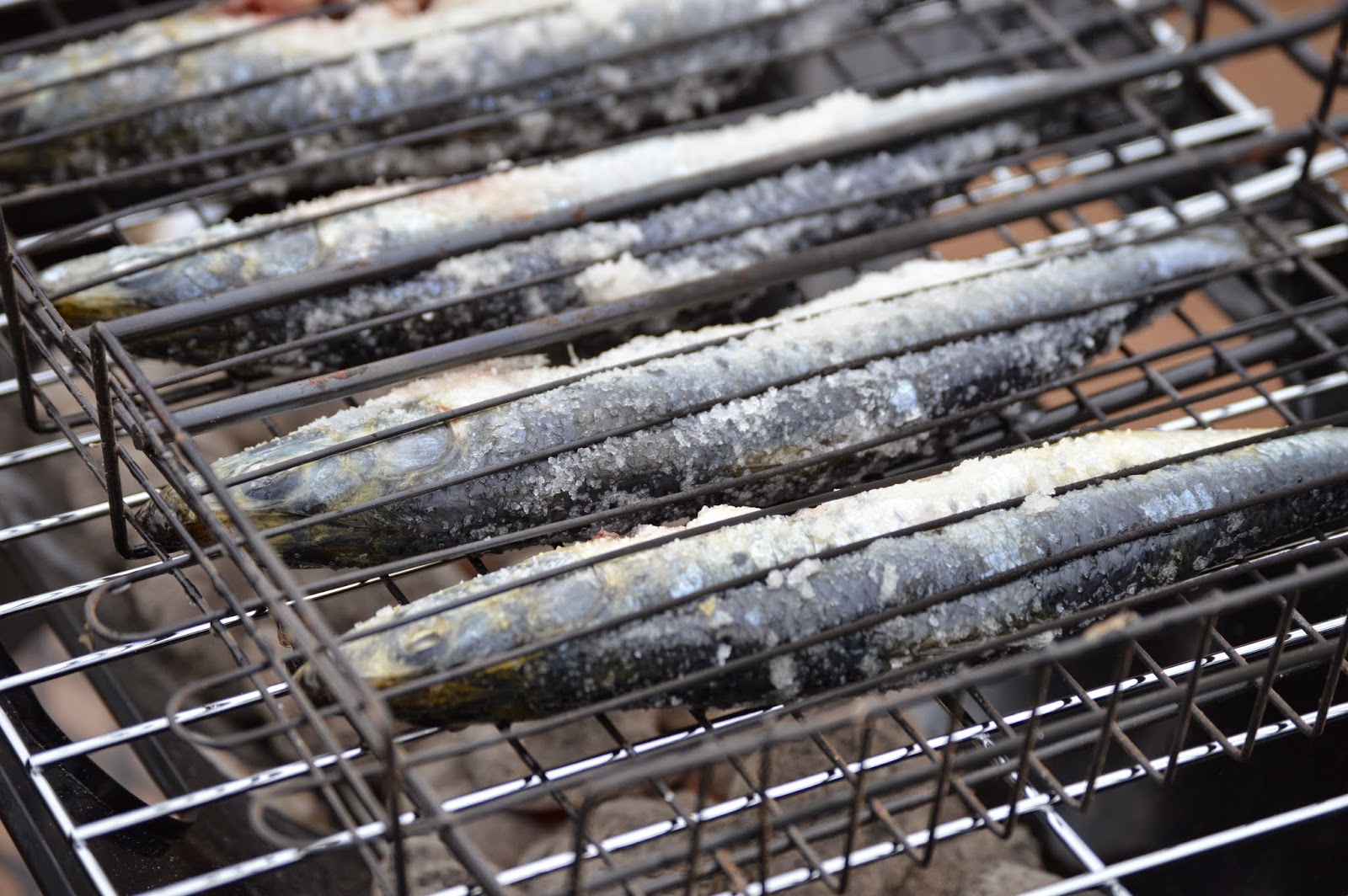 Instead of eating dried sardines for prosperity as is traditional in Japan, I ate some grilled sardines crusted in sea salt. Still wanting to pay homage to the Japanese tradition,however, I picked up a bottle of sake to compliment the fish. 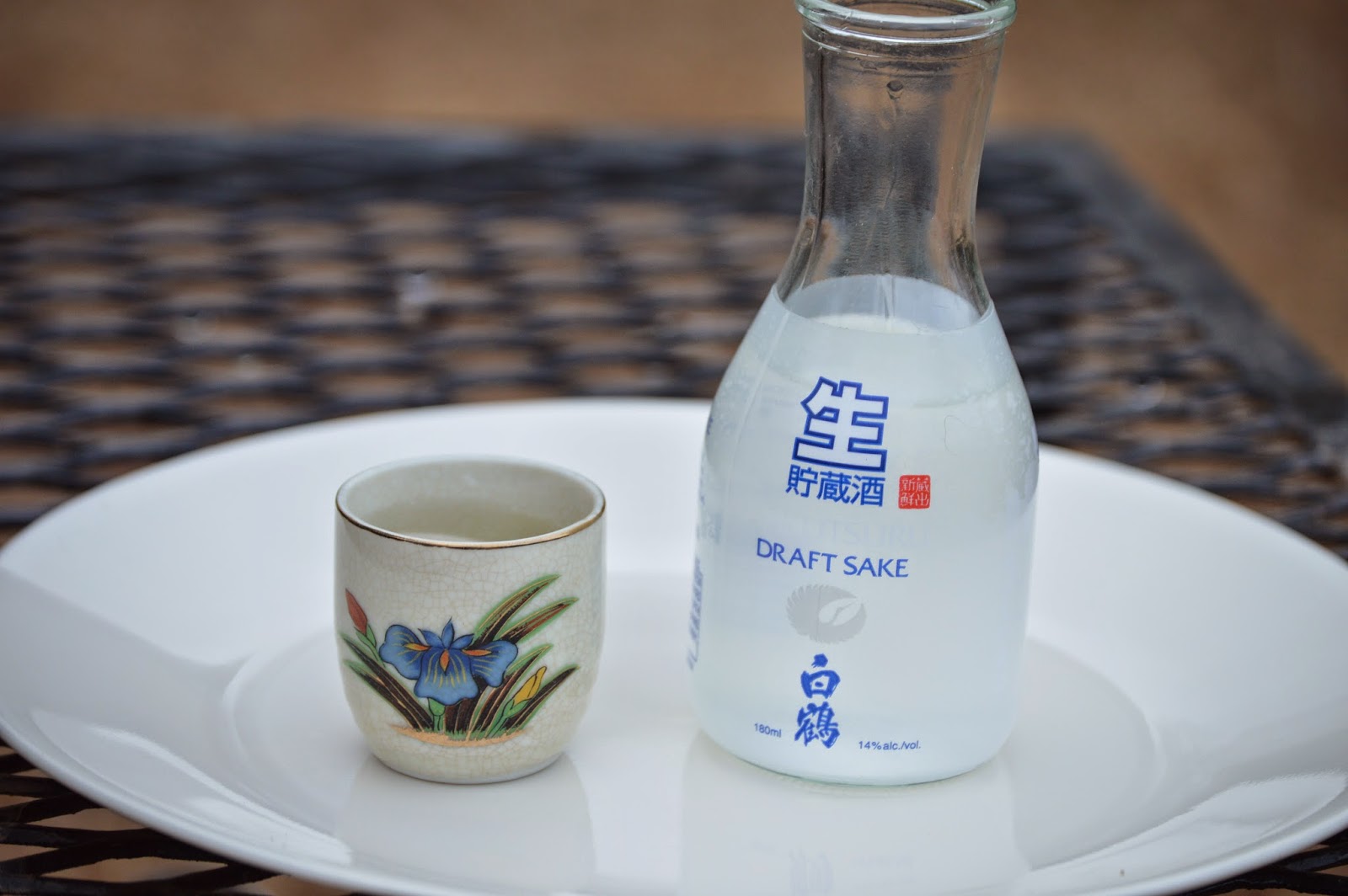 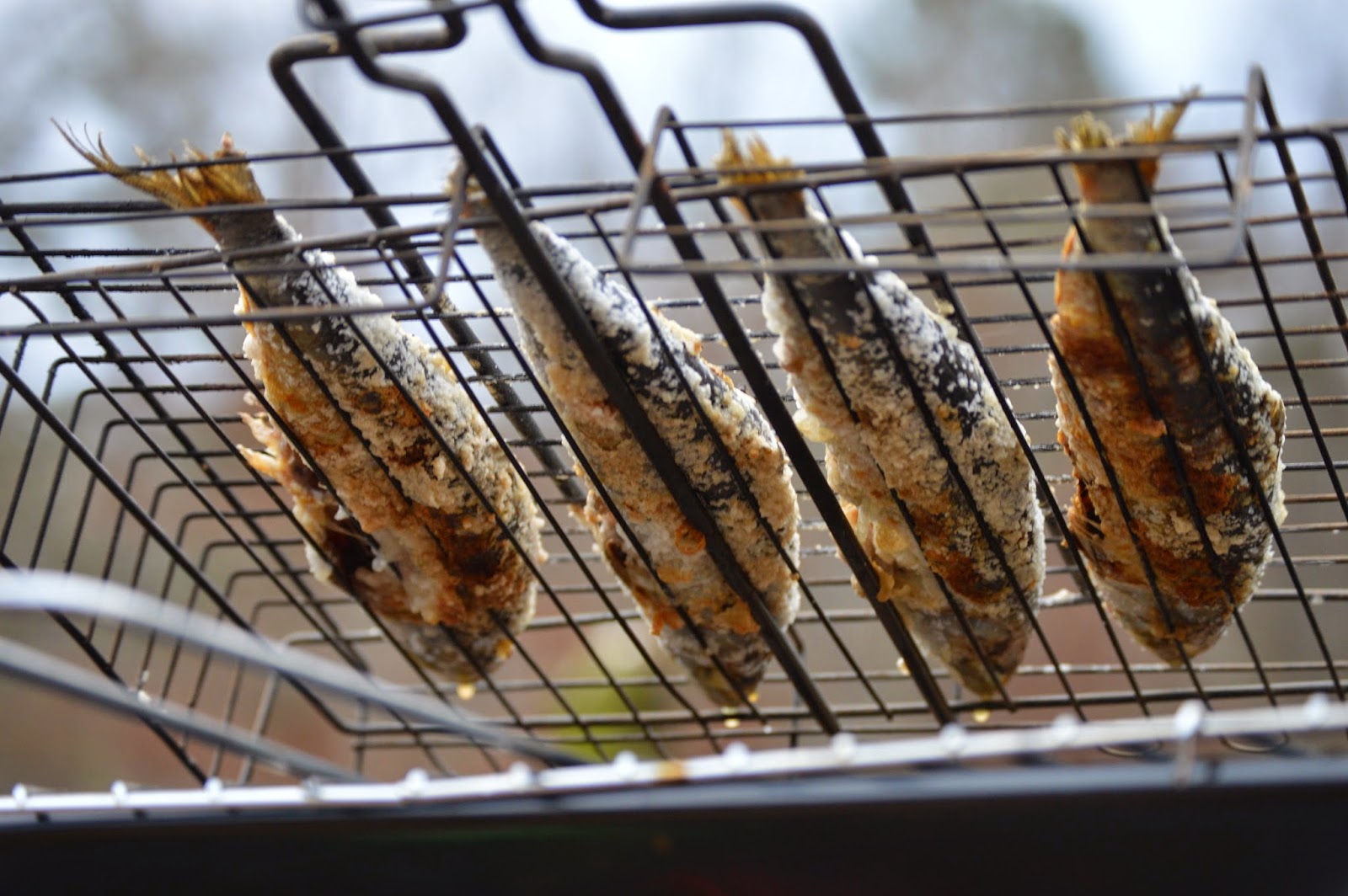 Two bottles may be needed next year since I went through a bottle while the fish were cooking, leaving me to add ale to my Sardine lunch. 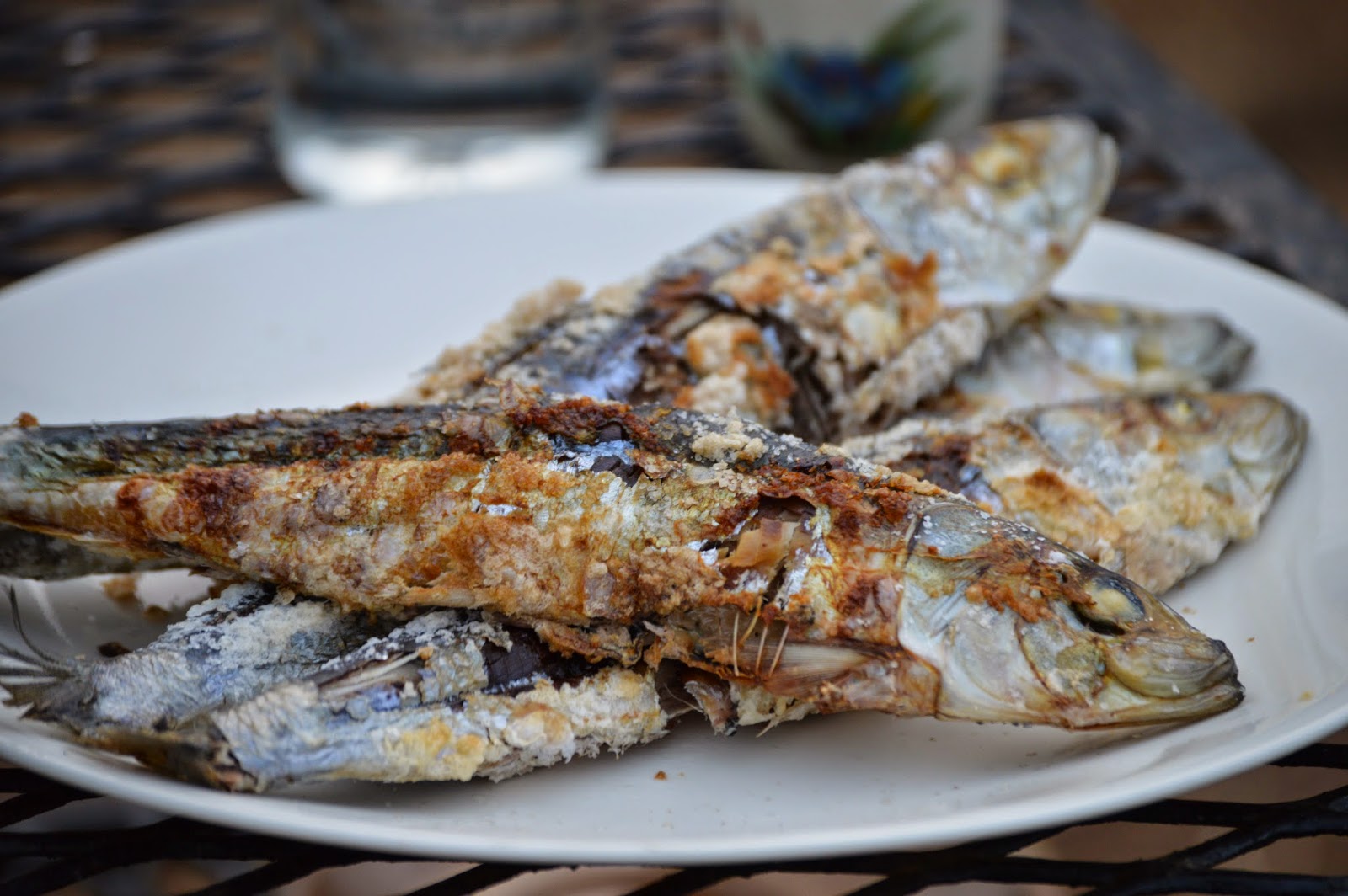 Wishing everyone a great 2015 full of great tinned sardines! Off to open a tin now! Keep popping those tins!
Posted by Drew at 1:37 PM 2 comments: 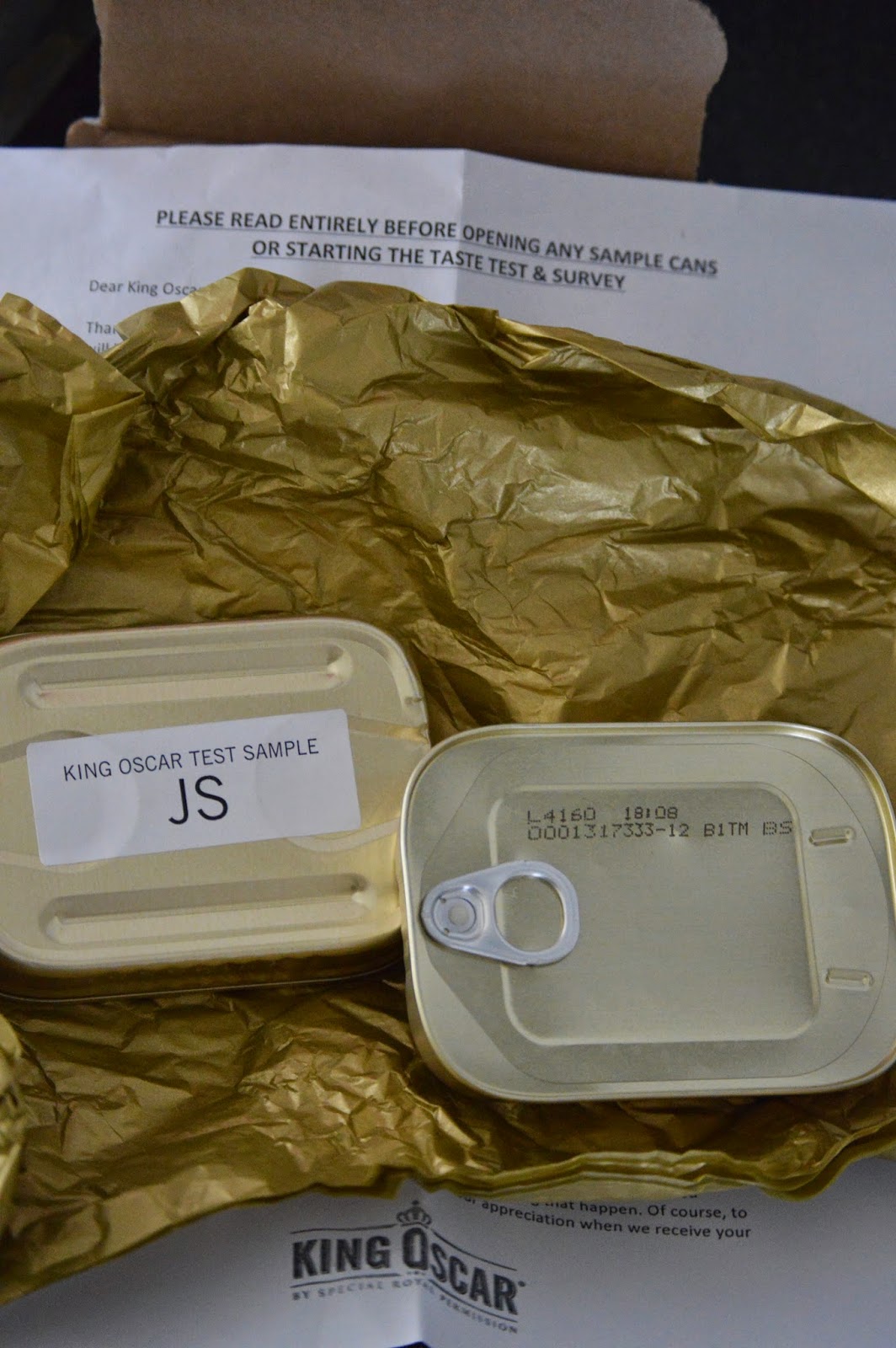 King Oscar is rumored to come out with even more varieties of sardines this year. King Oscar has changed ownership as of September  2014. I'm curious to see if any changes do occur. I was included in their taste test project last year. One of their new tins for 2014 was the Sardines in zesty tomato sauce; it is available in some markets now. This tomato sauce is thicker than their traditional tomato sauce blend. The sauce also has more flavor than the traditional.  I'll attempt to add the can later this year for a full review. As good as the zesty tomato sauce was, I think if they added a chili pod or two to the tin, it would really set this tin off. Maybe for 2015!? 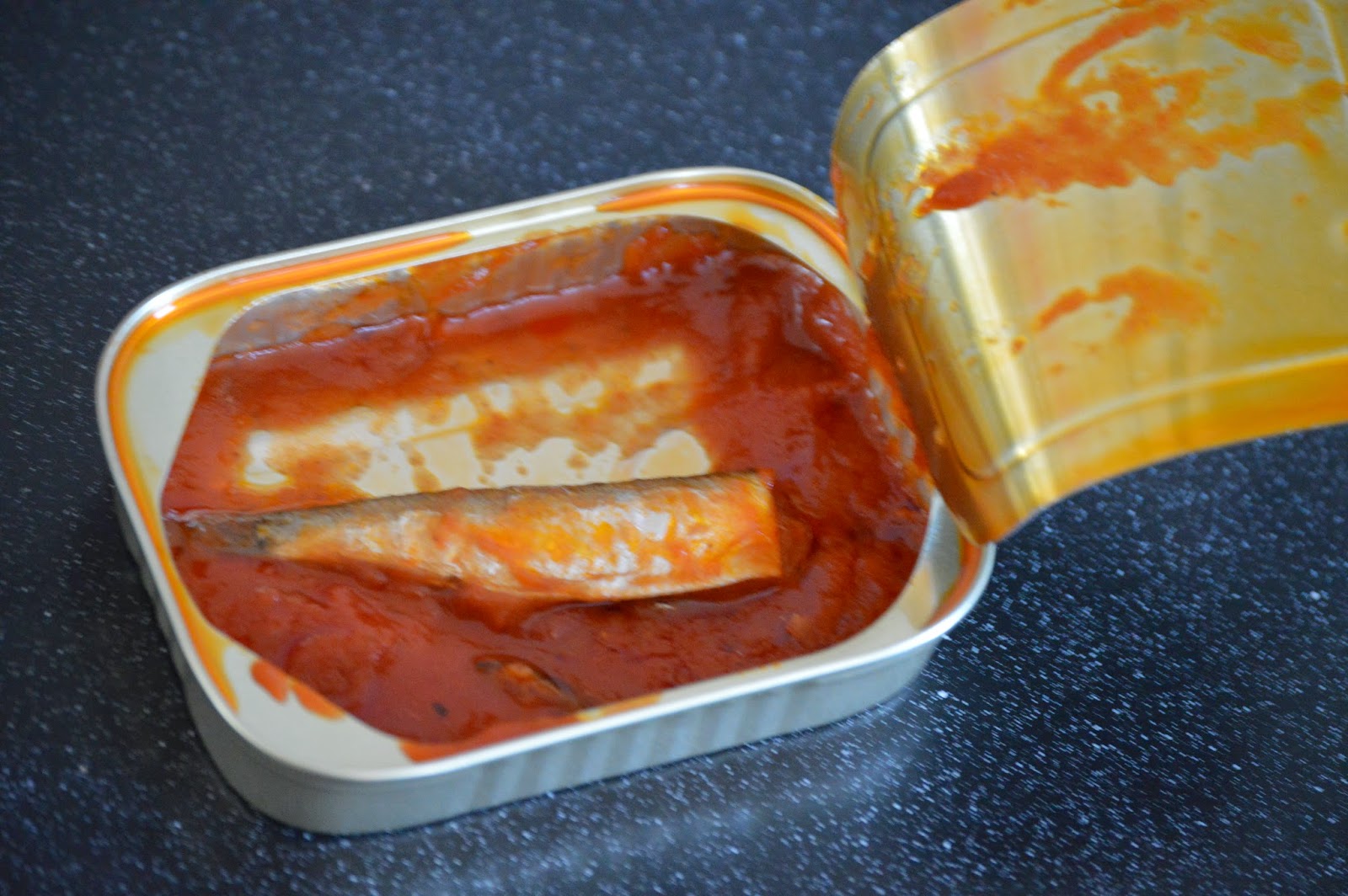 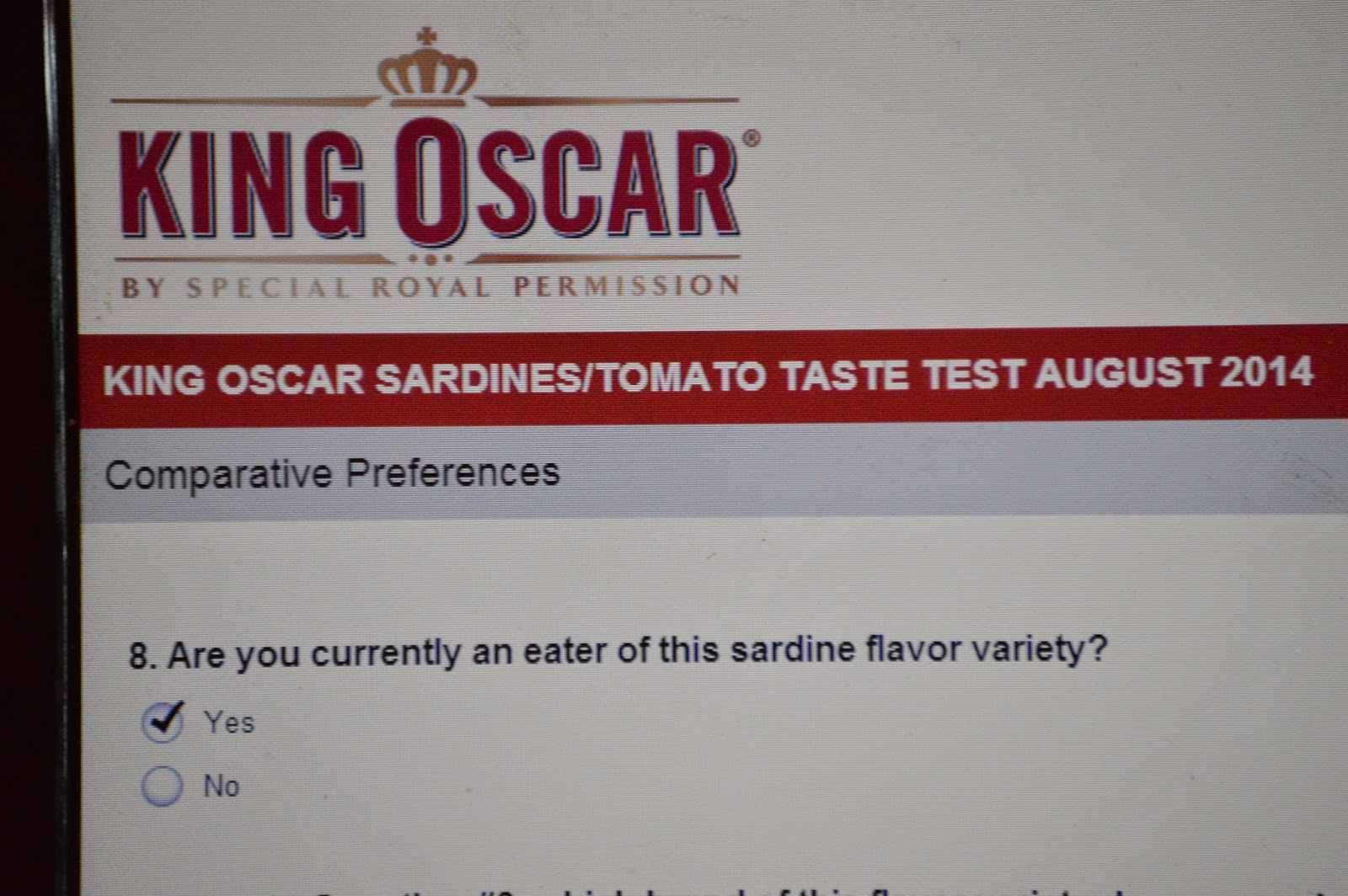 The next sample I received was their mackerel. It was large pieces of white meat. The instructions said to taste test them in any way  you liked. I as always try them straight from the tin. These are not sardines. I can see these in a spread, dip, sandwich or other dish. Straight from the tin, for me, no. The flavor is there. They would be better not eaten alone in my preference. 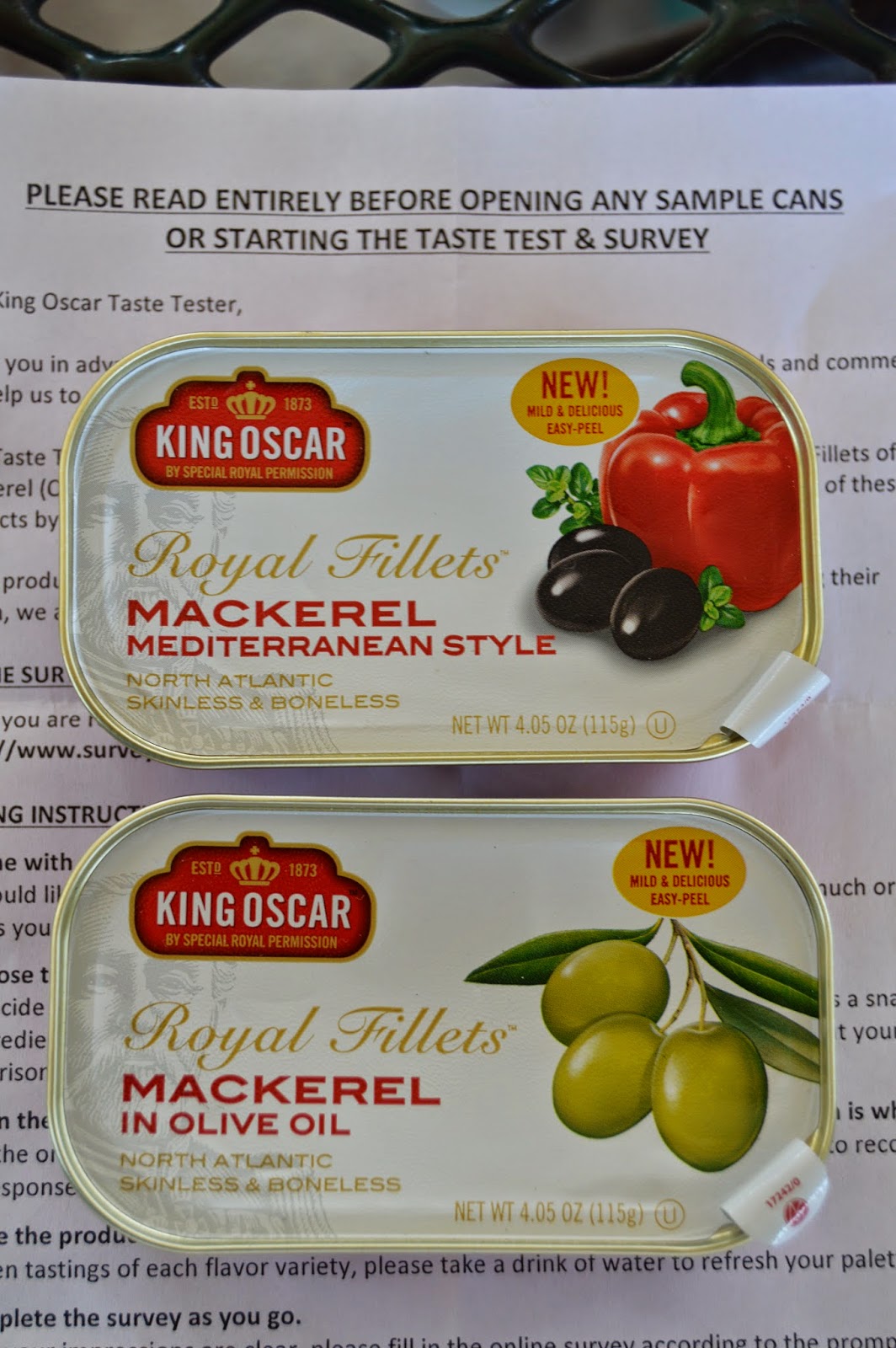 They are equipped with an easy peel lid. When asked my dislikes of this tin, I disliked the easy peel system (as I've mentioned on other sardine posts). It seems KO won the silver award at the Can Maker magazine "2014 Cans of the Year" competition for this design. The reason I'm not a fan of this design is that Season sardines uses this design also. While hiking I was a little rough with my pack while carrying said sardines, the lid did not withstand the impact, and it leaked out oil into my pack. For at home use, or older or people with restrictions, this is probably a good thing. If you're an outdoors-man of any type and carry along tins, I would choose carefully. 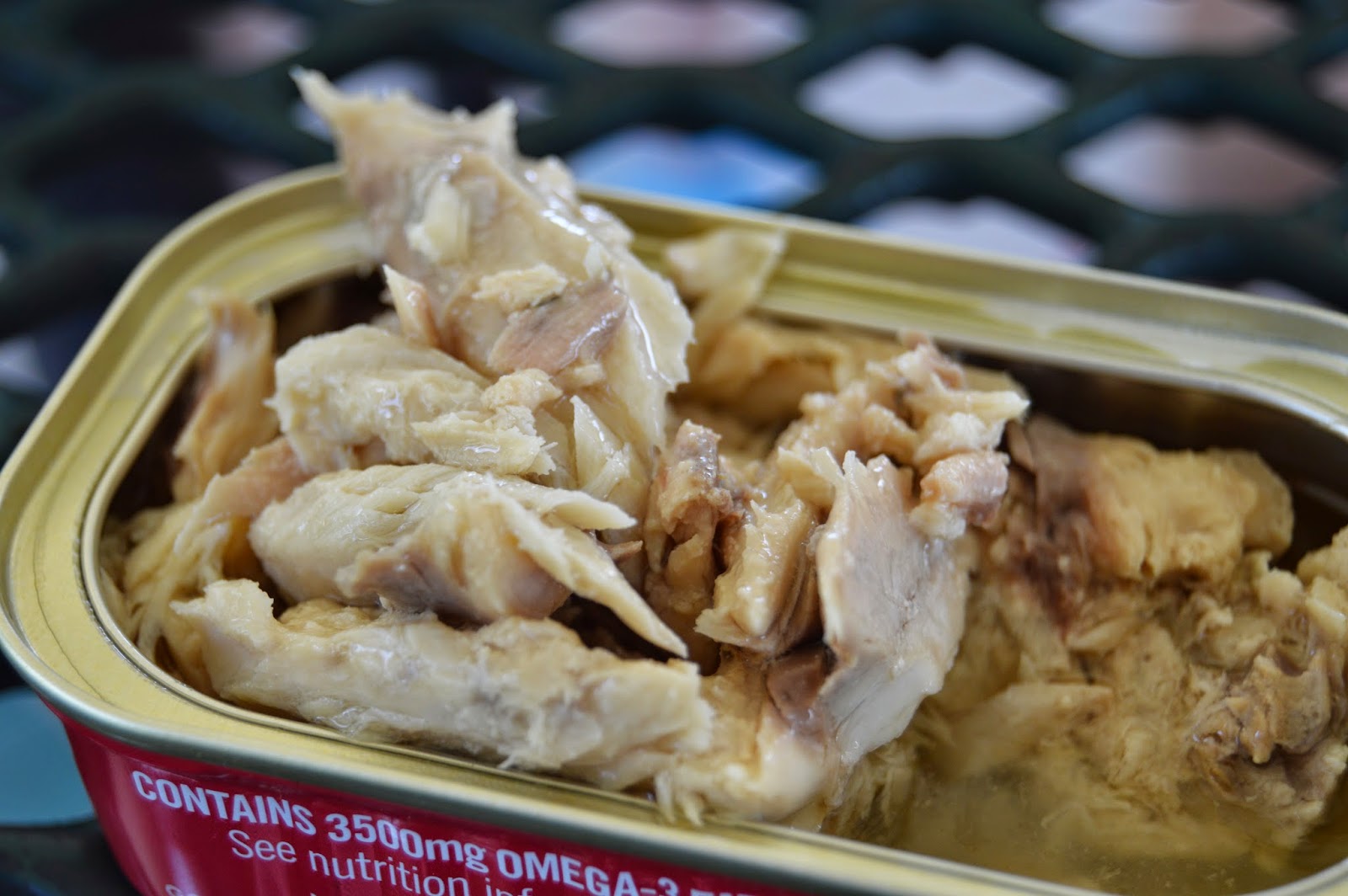 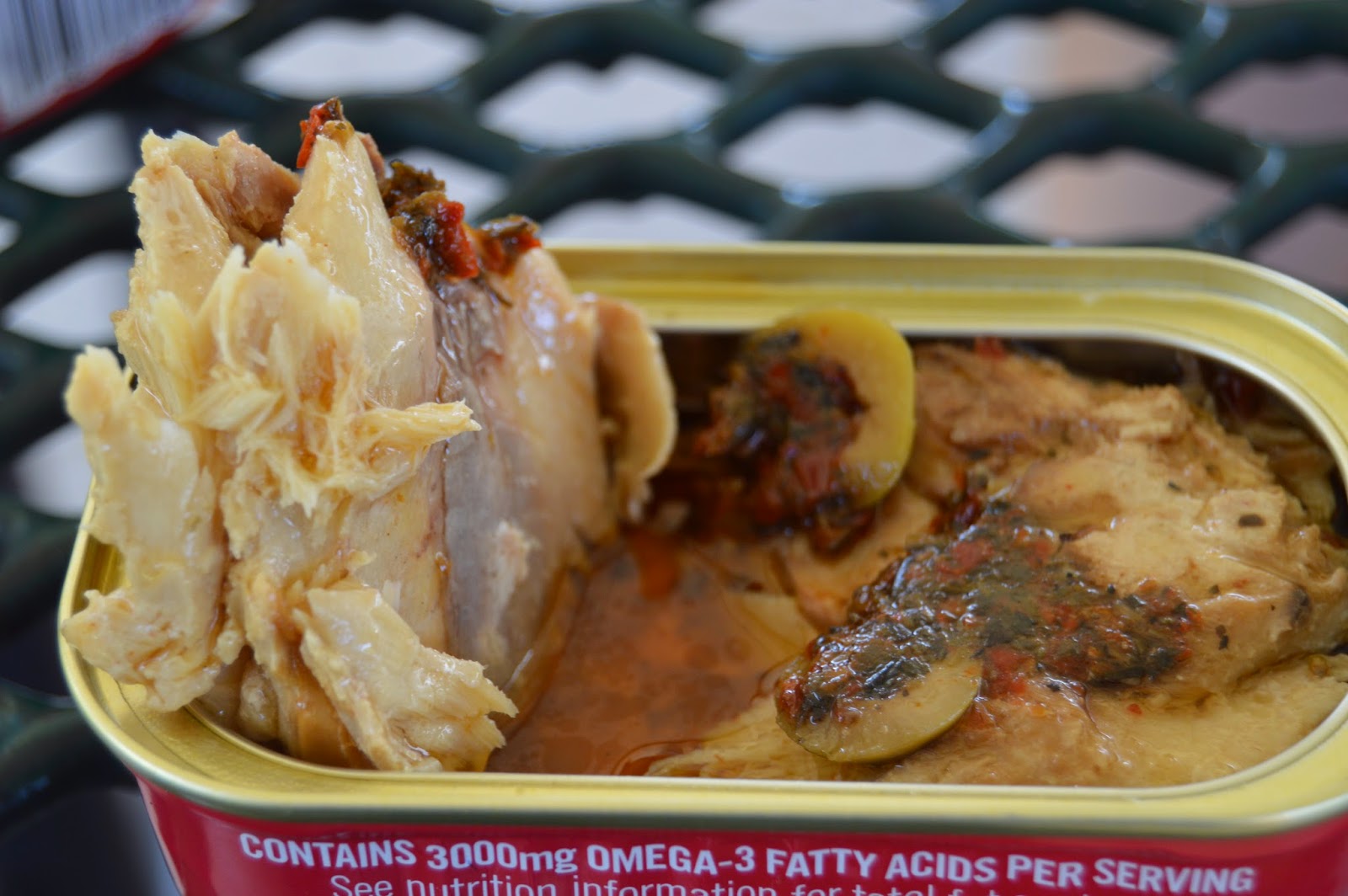 I'm a fan of aging sardines. King Oscar is a good brand to age and it can readily be found at almost every supermarket chain. I wonder if the foil lid would allow such aging? The foil lid is said to be added on with the same canning process as the metal lids. I don't know. I hope they leave their sardine tins alone.  Of course, I'm still nostalgic for the can keys. 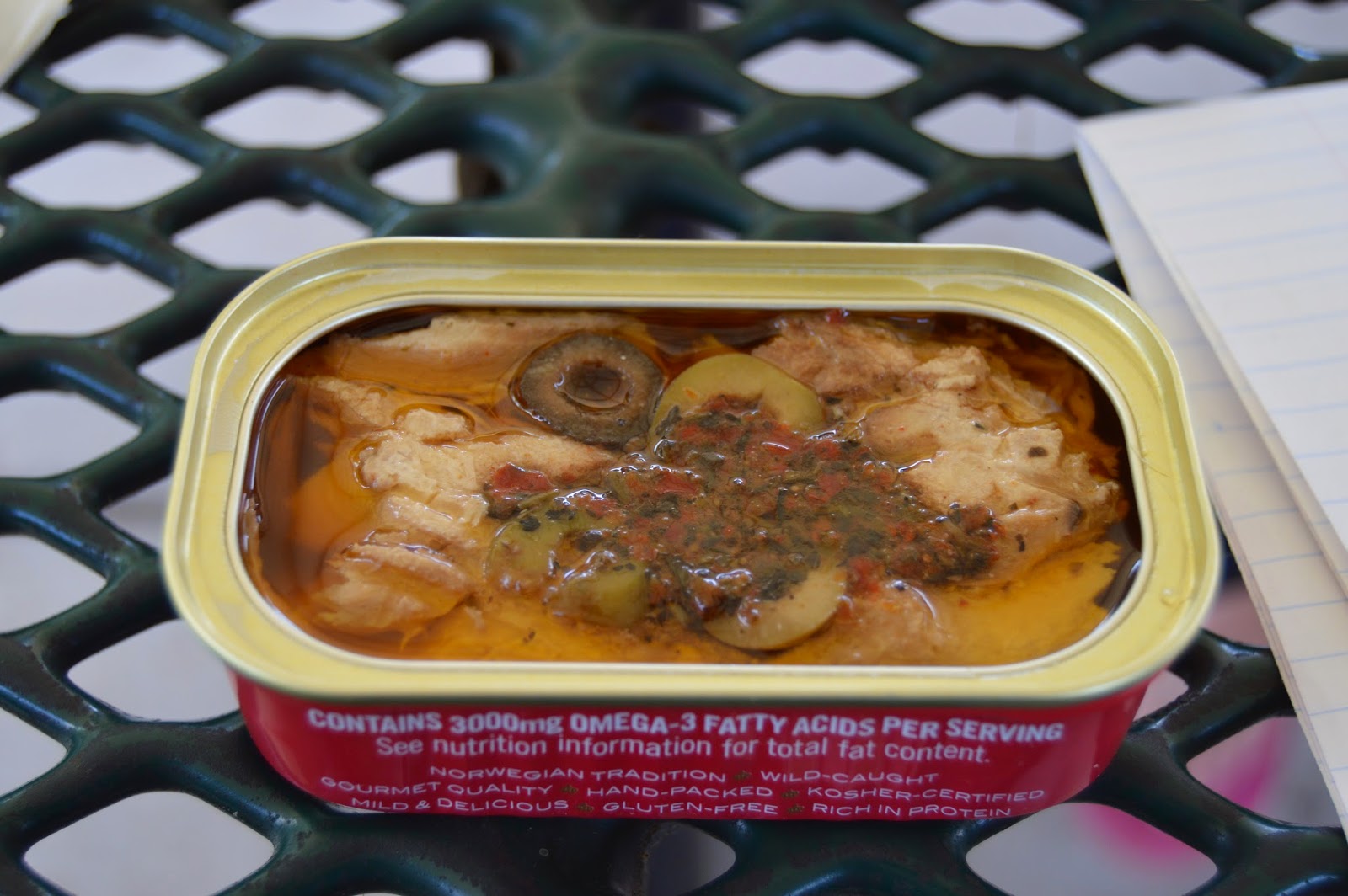