Hello sardine eaters,Today I attended the 21st sardine festival in Aberdeen, NC. The festival was a little over a three hour trip for me. Not wanting to miss anything or get caught up in traffic, I departed around 5:45 am, arriving in Aberdeen early. I rode by the park just to locate it; tents were going up as I went by. I hit up some local shops for the chance of acquiring new sardines (no luck).  I returned to the park at around 9:30, an hour and half early. Not wanting to seem like some crazed sardine stalker, I took a small walk around this gorgeous lake that was directly beside the shelter where the festivities are held. 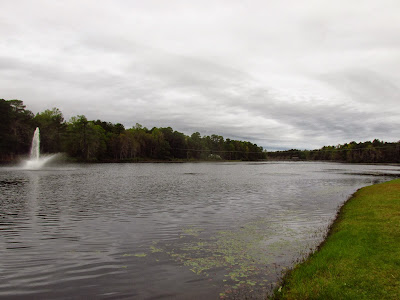 ,
However, feeling like a kid at Christmas, my short walk became even shorter. I ventured on over to the place of the event and began taking pics. The sardines, crackers, and Moon Pies were still boxed up. 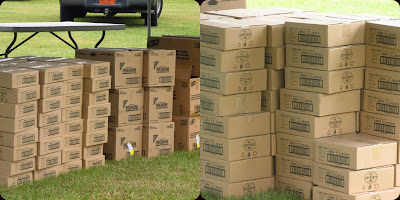 Condiments were making their way to the tables. Then I was discovered! A lady approached me.  I knew the gig was up. I was early and was about to be asked to leave, or worse, be banned from the sardine festival! Instead, I was met with a very welcoming and warm smile. She introduced her self as Kay Moss. (I later discovered she was the reigning sardine queen. I had just met Sardine Royalty!)

I introduced myself and explained a little about the blog. Kay Moss is the daughter of the late Randall Moss, the founder of the sardine festival. Kay took and introduced me to Dot Moss, the widow Randall Moss. Dot keeps the archives and scrap books of past sardine festivals' media. What a collection it is, dating all the way back to 1993, the first sardine luncheon! It's easy to get lost in these scrapbooks, reading articles and viewing pics from years past. 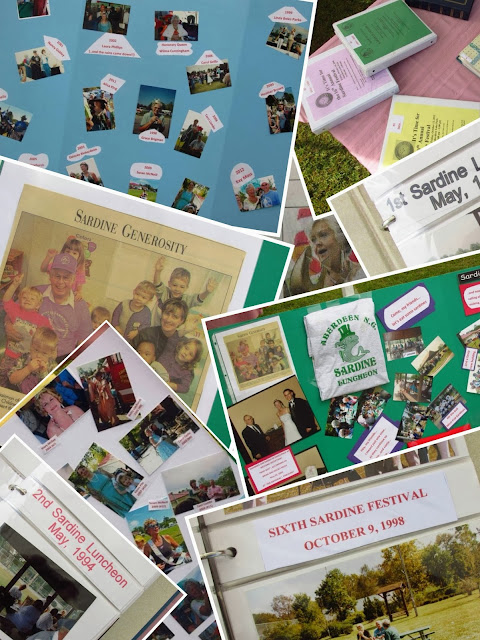 The late Randall Moss, started the what is now known as the annual International Aberdeen Sardine Festival back in 1993. What started out as a sardine luncheon between friends continued to grow over the years.
As I learned about the late Randall Moss and listened to stories, he seemed like a gentleman I would have very much liked to of been able to talk with over a tin of Sardines. Any man who loved sardines enough to start a festival is a very impressive man indeed. 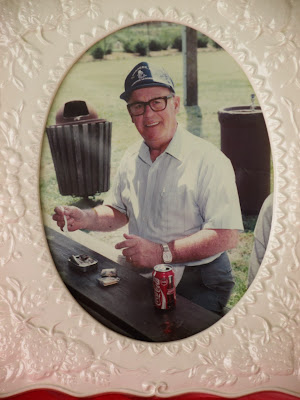 Mr. Moss passed away on March 25th, 2010. The last sardine cannery in the U.S. closed on April 18th, 2010. Less than a month apart, the world lost two sardine ambassadors.

As time slowly crept closer to 11 AM (starting time), people began showing up in droves, some requesting and receiving their door prize tickets (the sardines and drinks are free, but a donation is encouraged if possible) before sardine serving commenced. 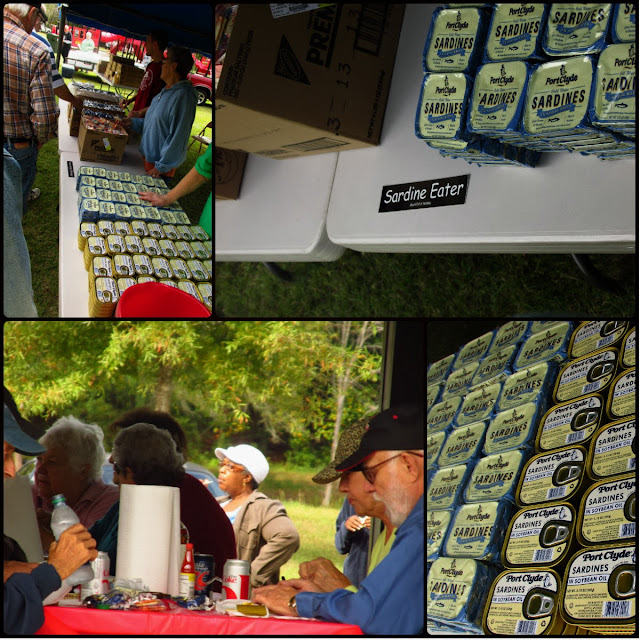 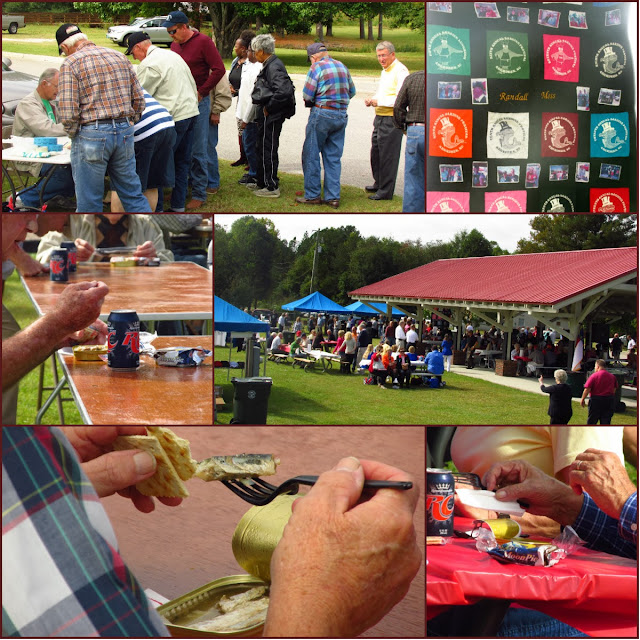 Then it began.  I anxiously got in line, receiving my tin of sardines (they had two to choose from: Port Clyde in water or oil), my saltines, a Moon Pie, and an ice-cold can of RC Cola. 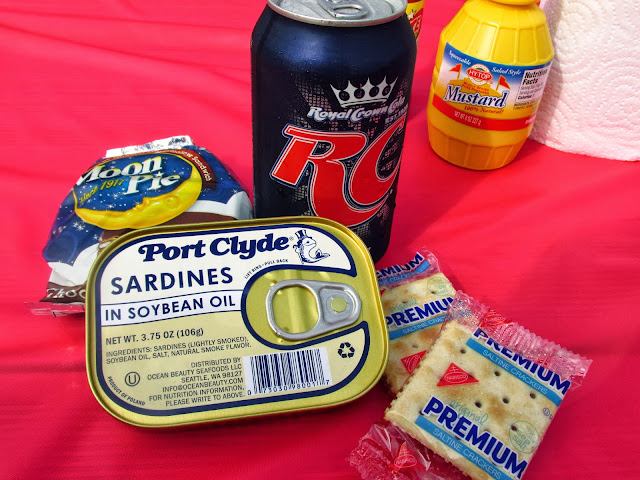 Every table had vinegar, mustard, and hot sauce on them. I'm an "eat 'em out of the can" type of guy. Whatever they come in is how I enjoy them. 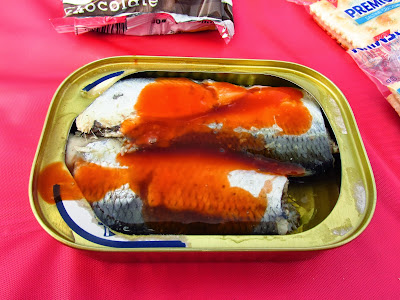 A patron attendee by the name of David, who sat beside me, offered me his own personal hot sauce that he brought to the festival with him. (Where I'm from, if a man offers you hot sauce, you don't say no.) It was the Texas Pete extra hot brand.  It really complimented the fish. 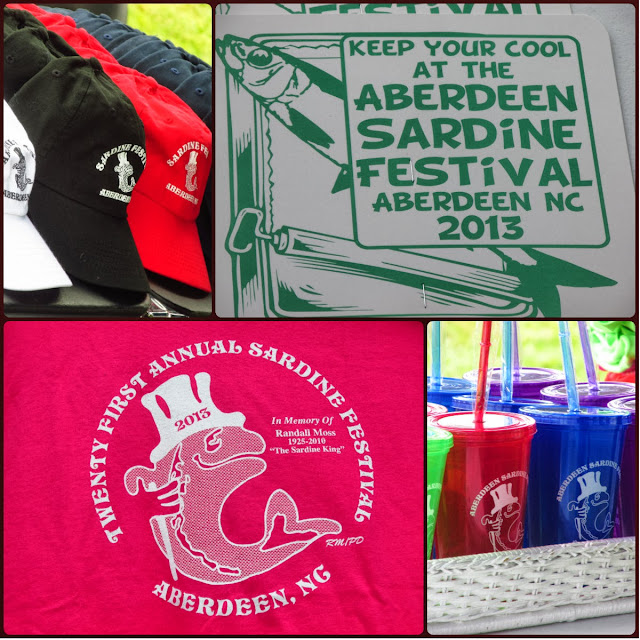 The festival offered music, clog dancers, and just wonderful companionship. It is one of the largest gatherings of sardine eaters I've had the pleasure to witness in one sitting.  I gave away loads of "Sardine Eater" decals throughout the festival. 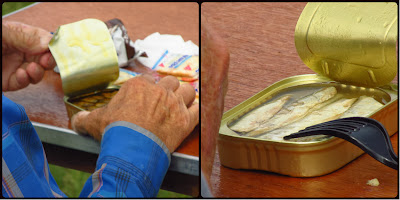 Non-sardine eaters showed up as well, some brought tins of oysters, others sandwiches. Some sardine eaters even brought their own tins of sardines to enjoy. 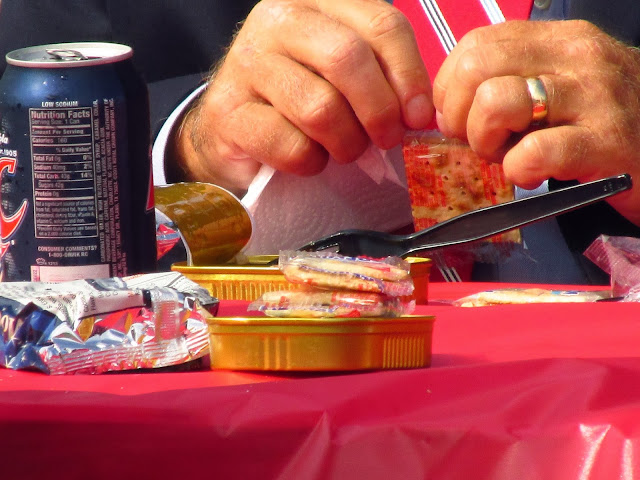 You couldn't ask for a nicer bunch of people to spend the day with.  I was a stranger, not knowing a soul in over a 100 miles radius, and yet, I was treated and felt as if I had always been there. The ride of 3 plus hours is a good one, but after today, I would travel double that to be there. I will definitely be there next year. If you want a great day, plan on attending next year. Dot Moss informed me that the date is in stone now, the 2nd Friday of October. Next year's event will be October 10th, 2014. Maybe next year, Mouth Full of Sardines will create a multi-tin gift basket for one of the door prizes. I will have to get in contact with a coordinator and find out if it's acceptable. 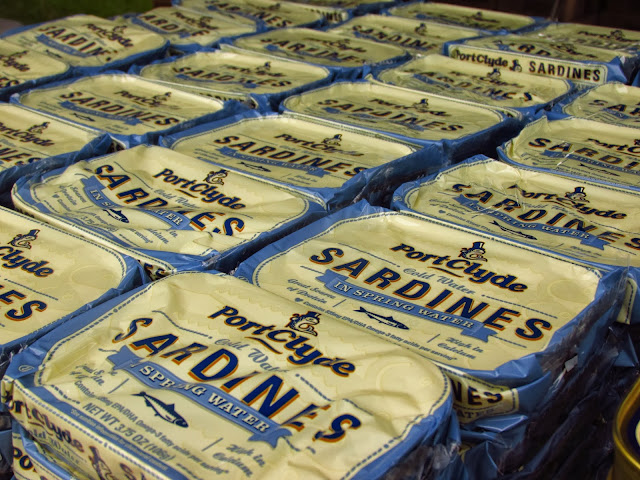 It's amazing how a simple tin of sardines can draw such a diverse crowd of people. That is just another reason why sardines are truly a great food.  It's food truly enjoyed by all.


I hope to see some of you Sardine Eaters there next year.  As I said as I was pulled on stage and put on the spot, "the only thing better than the sardines here is the fellowship"

Thank you Aberdeen Sardine Festival for a truly great and heartwarming time. See you guys next year.