Hello,
I just found your sea of sardine love. The Sardine Society blog has gone dormant and may have been schooling around my area.
On the weekend my dad will eat a cheap tin of sardines and I’d watch. It was only as I got toward my Wrinkley years did an interest and obsession take hold. Cases of Saltines and the gallon version of Franks Red Hot.
The shelf usually has 50-100 cans for emergency back-up, that being every day usually, but slowing recently.
My German mother got us to Germany and I continue to go. Not sardine country in the southern part where my cousins live but close to France and the giant Carrefour HyperMarket.
That takes us to England for John West (well known brand) , Cornish sardines, and the love of mackerel.  Google Kraster Kippers.
On the way to the coast (Astoria: Kindergarten Cop, The Goonies both filmed there)  taking the Columbia River route we stopped at a history marker about John West.
Astoria was once a huge fishing community of Scandinavians and Finns. Tuna and salmon that ran so thick it was scooped out with what looked like  water wheels. Not much left today except that sardine have been running more northerly. Caught mostly for bait and frozen but some fresh does show up. I’ve canned Albacore several times while camping.

Riga Gold has mackerel also.  Very good.
The Germans have herring in various canned forms with their Baltic Sea border.  Alstertor, Ruegenfisch, …
While at  a big Korean store here I see their canned fish is Saury. The can states Pike Mackerel but it is not a mackerel. The Russians have in also, which in Cyrilic looks like ‘Caupa.’ I like this with a little slather of Best Foods Mayo.  We’re not salad dressing people in the Northwest.   The Japanese eat it also.
https://en.wikipedia.org/wiki/Pacific_saury

Wild Planet’s sardines used to be “sustainably caught off the California coast”;  now it is ”north pacific ocean.” But packed in Vietnam. I wonder if they didn’t take large blocks of frozen bait sardines from here and can them there?

Thank you for the blog and ratings.  Would it be possible to put your sardine rating next to the tin named  being reviewed so that the reader can see the highest ratings without having to go to each review?

My name is Jeff Mandell and I’m a producer for the Travel Channel show Bizarre Foods with Andrew Zimmern. We are planning an upcoming episode in Lisbon and I came across your website while doing some research on sardines.

I have a few questions and am thinking you might have some insight. Do you have any time this week to chat?

We can smell you from over here ..

This is D.L. Anderson, a fellow lover of the tinned fish up the road in Durham. I've been thoroughly enjoying your compendium of all things sardine, especially the tasting notes. I'm a proud member of The Grand Order of The Sardinier, which is a men's civic league dedicated to the discrete enjoyment of tinned sea creatures and spiritous libations. We have gatherings once every quarter at various well-ventilated locations and have the following, humble requirements for entry; one or two tins of fish and a story of their source (real or imagined) or a poem or both, plus respectable attire (sport coats, blazers, clip-on) and a cordial disposition.

"I want to go quick like a seedless olive into the mouth of a fool,
as young girls keep arriving from Des Moines wiggling like sardines in a striped dress,
what does it mean, listening to Beethoven now?"
- Charles Bukowski (the rest of the story)

We appreciate all the work you're doing to catalog and celebrate sardines and we would be honored to host you for one of our events if you're ever planning a trip to the area.

We are also quite interested in attending the sardine fest in Aberdeen. 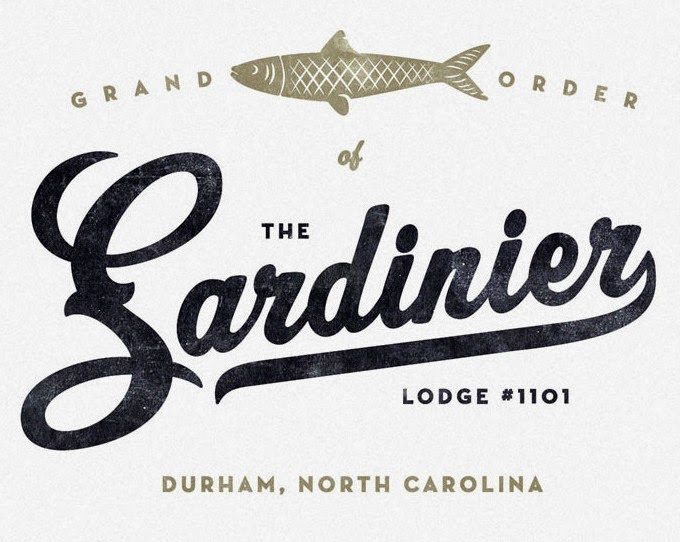 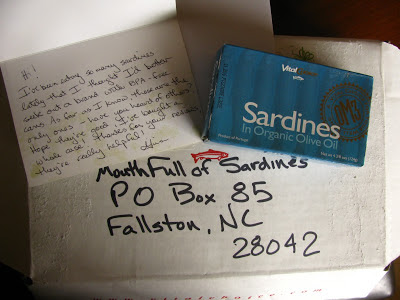 Thank you to sardine eater Gina for another great tin of fish. That was truly a wonderful surprise.


Some of you sardine eaters have started looking for BPA free sardines. Along with Vital Choice having BPA free cans, there are a few more out there . Wild Planet, Rain Coast , King Oscar, and certain tins of Ocean Prince are BPA free tins. Trader Joe's does have BPA free canned goods, but sardines are not one of them. From a letter they put out last year, they are attempting to move more of their canned goods to BPA free. Sardines may be on the list.

The French just put into effect a law banning BPA in any products intended for children under three. That law took effect in Dec. 26th 2012.

If any of you sardine eaters know of any or run across other BPA free sardines, let us know.